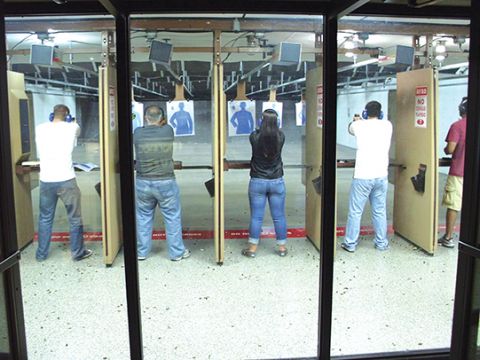 The categories consisted of two groups of single-firearm owners and three groups of multiple-firearm owners, including a small but unique group who own high-capacity magazines and assault-type weapons and carry a loaded handgun for protection against people. MPG file photo

The categories consisted of two groups of single-firearm owners and three groups of multiple-firearm owners, including a small but unique group who own high-capacity magazines and assault-type weapons and carry a loaded handgun for protection against people. Limited prior research has linked these characteristics with higher risk of injury and crime.

The UC Davis study is the first to identify nuanced patterns of gun ownership.

“We found striking differences between the groups, which suggests one-size-fits-all approaches to preventing firearm injuries and death may be less effective than those that consider these differences,” said Julia Schleimer, VPRP researcher and study lead author. “By identifying different patterns of ownership, we hope to inform the development of public health and safety efforts that are relevant to firearm owners’ varying motivations, choices and risk.”

Schleimer believes more research on the link between these patterns of ownership and firearm violence is critical. The study did not aim to draw such conclusions about the five types, although several of the defining characteristics of these groups – storing a firearm unlocked and/or loaded, carrying a handgun and owning an assault weapon – have been the target of laws and public health campaigns to reduce firearm injury and death.

The five types of firearm owners

The researchers distinguished the five groups by identifying common combinations of survey responses to questions about the number and types of firearms owned, primary reason for having firearms, storage practices, whether owners carried a loaded handgun and whether they owned high-capacity magazines.

Single-firearm owners differed from each other in the type of firearm owned, primary reason for ownership and how the firearm was stored:

First group (26% of owners): Members were likely to own one long gun for a reason other than protection against people, such as hunting or sport shooting;

Second group (21% of owners): Members commonly owned one handgun primarily for protection against people and stored it in a moderately secure manner. This group was most common among women.

The authors found substantial variability among those who owned more than one firearm. In fact, owning multiple firearms was the only characteristic that these three groups had in common:

Third group (31% of owners): Members commonly owned five or more firearms, owned both handguns and long guns (but not assault-type weapons), owned primarily for a reason other than protection against people and stored all firearms in the most secure manner (locked and unloaded);

Fourth group (14% of owners): Members were likely to own two to four firearms, including handguns and long guns, primarily for protection against people. They also stored at least one firearm unlocked and loaded;

This research was supported by the University of Calfornia Firearm Violence Research Center with funds from the state of California, the California Wellness foundation (2014-255), Heising-Simons Foundation (2017-0447), Langeloth Foundation (award no. 1824).

The UC Davis Violence Prevention Research Program (VPRP) is a multi-disciplinary program of research and policy development focused on the causes, consequences and prevention of violence. Studies assess firearm violence and the connections between violence, substance abuse and mental illness. VPRP is home to the University of California Firearm Violence Research Center, which launched in 2017 with a $5 million appropriation from the state of California to fund and conduct leading-edge research on firearm violence and its prevention.