|  Story and photo by Shaunna Boyd 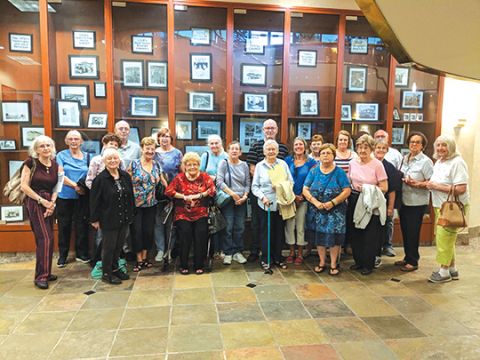 Residents of Rancho Cordova’s Mobil Country Club senior community addressed the City Council about the financial hardships they are facing due to ever-increasing rental costs.

RANCHO CORDOVA, CA (MPG) - Due to the rising cost of living in their hometown of San Jose, CA, Bob Van Cleef and his wife Mary moved to the Rancho Cordova senior community at Mobil Country Club (2473 Sunrise Blvd.) last December. When they discovered this community, they “fell in love,” Van Cleef said. They were drawn to the gorgeous house, spacious community, and the active social calendar. They quickly became involved in the activities at the community clubhouse and enjoyed the amenities while bonding with their new neighbors. Van Cleef said they thought they had “hit the jackpot. It’s a great place to live, a great community.”

“But there’s another side of the story,” said Van Cleef.

Van Cleef said that to increase profits, Mobil Country Club (owned by Storz Realty) implements an increase to residents’ monthly rental fee each December. Van Cleef said Storz has reduced the amount of staff employed at the park and there has been no increase to park maintenance, so residents are not seeing any benefit from these extra costs.

The rental fees the residents pay only guarantee them the spaces where their homes sit. Van Cleef said because residents in the Mobil Country Club community own their homes, they are responsible for all home repairs, maintenance, utilities, taxes, and insurance.

When residents receive notice of rent increases, they are not given any justification for the increase — just a warning that the increase will take effect in 90 days. And Van Cleef said the newest rise in rent will be an increase of almost 7%.

Helen Fredericks moved into the community in September 2017. Right after moving in, her monthly rent increased by $36. The following year her rent went up by an additional $50. And residents recently received notice that the monthly rent will increase by $46 on December 1, 2019. With the upcoming increase, Fredericks said her monthly rental fee will have increased by 18% in just over two years.

Mobil Country Club is a community for seniors over the age of 55, and Fredericks said many of the residents are veterans, disabled, and on fixed incomes. With the cost of the mortgage and utilities, Fredericks said the ever-increasing monthly rental fee will eventually push some residents out because the costs will become too high.

“We own the houses,” said Van Cleef, “but they’re not mobile.” He explained that not only is it cost prohibitive to move the houses, but there is nowhere to move them. “There haven’t been any new parks made in 30 years.” In the existing parks, there are very few open spaces available, and Van Cleef said most won’t accept older homes.

Van Cleef said he believes the goal is to “raise the rent high enough to push out the [residents] because they can’t afford to pay — and then they’ve left behind their only asset.” And once a resident stops paying rent, Van Cleef explained that Storz can declare the home abandoned, take ownership of the home, and then fix it up and resell it for a profit — starting the cycle over again.

“So many are getting economically evicted,” said Fredericks. “This is an affordable housing crisis. Why isn’t it treated as emergency, as a crisis? … It’s legal extortion.”

Van Cleef said, “I was under the impression I would live here forever. … It’s marketed as a community where we can live out the rest of our lives.” He said, “It’s all because of greed … and the government oversight isn’t there. The people voted to represent us aren’t representing us.”

Fredericks explained that there are some cities that have implemented rent control to protect seniors from economic eviction, but she said Rancho Cordova does not currently have any such legislation. Hoping to change that, residents of Mobil Country Club addressed the Rancho Cordova City Council during public comment at the meeting on October 21.

Van Cleef told the Council what the residents are facing: “The recent rent increases have resulted in a major restriction in their ability to pay utilities, to buy food and medicine, and just live a normal happy life.”

Gloria Olsen said that a $50 increase in the monthly rent is too much to afford: “It’s a financial hardship.”

Barbara Thomen asked, “If it keeps going up $50 [every year], where am I going to go? What am I going to do?” Mayor Bob McGarvey thanked the residents for sharing their stories and encouraged them to set up meetings with City staff to provide more information about this issue.

Storz was asked to comment on this story but did not respond to the request.