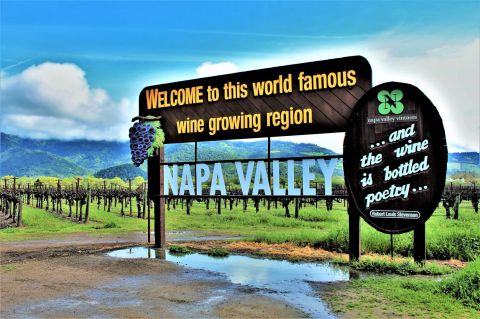 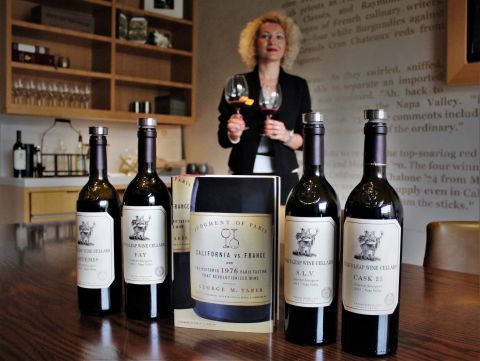 While many landmarks that put America’s most iconic industries “on the map” are sadly no longer on the map – Blondeau Tavern, home of Hollywood’s first motion picture studio, and El Rancho Vegas, the original casino-resort on the Las Vegas Strip, among them – the winery universally recognized as bringing Napa Valley into a position of prominence still thrives as both a major producer and tourist attraction.

From the volcanic-soiled vineyards of Stag’s Leap Wine Cellars grew the grapes of a 1973 cabernet sauvignon that shocked the wine world by triumphing over some of France’s bottled best in a blind tasting known as the "Judgment of Paris." The astonishing win would cultivate America’s cabernet culture, and the story, adapted into books and films, the most prominent being 2008’s “Bottle Shock,” is revered from Los Carneros to Calistoga. Wherever I brought up Stag’s Leap Wine Cellars on a recent visit to Napa Valley, even competitors were magnanimous, hailing the winery as seminal.

By the end of November, which caps off a four-month peak season, an estimated 50,000 visitors will have paid homage and the minimum $45 fee to sample the four cabs that make up Stag’s Leap Wine Cellars’ coveted Estate Collection. As drinking-aged guests savor pricey pours of Artemis, FAYE, S.L.V. and flagship Cask 23, they take in sweeping views of the very vineyard where in 1961 pioneering grape grower Nathan Fay first planted cabernet sauvignon in what is now the Stags Leap District. Some tours include entering the caves, where the barrels are kept, but perhaps the coolest thing to see can be done for free; on display is a bottle of the history-making 1973 S.L.V. cab, allegedly one of only two left in the world. The other is at the Smithsonian, where it’s showcased alongside Neil Armstrong’s spacesuit and Abraham Lincoln’s top hat as one of the “101 Objects that Made America.” Napa folk prefer to call it “the one that started it all.”

Tastes of Provence and other Mediterranean inspirations, along with a 15,000-bottle wine cellar, impeccable service and a killer view, have earned Auberge du Soleil 13 consecutive Michelin Star awards. From Executive Chef Robert Curry’s kitchen come such seasonal delicacies as Kurobuta pork chop with caramelized apples, mustard spaetzle, Swiss chard, cider sauce and, for a hint of nuttiness, farro, of course. Topping the dessert selections is a Tahitian vanilla bean mousse torte flanked by roasted pineapple, blood orange sorbet and shortbread streusel. And that’s just brunch ($75 for three courses). If dinner interests you, a three-course meal is $125, four courses are $145, and the six-course chef’s tasting with wine pairing is $171.

Auberge du Soleil’s success spawned Napa Valley’s first hotel to receive a five-star rating from Forbes Travel Guide. The 2019 edition makes it six years in a row for the 50-room French-style country inn where a three-night minimum stay in a standard room starts at around $3,600.

At the southern edge of the valley is Los Carneros, a unique viticulture area in that it straddles Napa and Sonoma counties. Carneros Resort and Spa and its fine dining restaurant FARM are fantastically located if visiting both wine regions. Gated lodging is laid out like a mobile home park, but don’t expect to see any trailer trash with rates starting at a grand a night. Charming cottages dot the resort, each with a rustic front porch adorned with weathered rocking chairs and a mailbox, and interiors of shabby chic décor and such luxuries as a heated bathroom floor and espresso machine. French doors open to a private outdoor patio with a gas fire pit and twin chaise lounges with an overhead electric heater. If showering or bathing inside is too ordinary, go al fresco and trust that the ranch-style sheet metal walls are high enough to prevent any peeping Tom neighbors.

Outside the automatic gates is a town square anchored by FARM, quite possibly the best Napa Valley restaurant without a Michelin star. Dinner was off the single-ingredient tasting menu with wine pairing ($185). Executive Chef Aaron Meneghelli changes the left side of his menu every mind-blowing fortnight, and tonight featured citrus. Local halibut with blood orange aguachile led to spiced pork belly soured and sweetened with burnt Meyer lemon glaze. The prime filet mignon perked up with charred kumquats. The ensuing cheese course, washed down with Honig late harvest sauvignon blanc, delighted with the presence of candied mandarinquat, which, as the name suggests, is a hybrid of a mandarin orange and kumquat. Its powerful punch can be as surprising as the fact that the fruit was developed in 1973 at UCLA, an institution not exactly known for its ag accomplishments.

Make dinner plans for another night at Solbar, a culinary gem in Calistoga, Napa Valley’s northernmost viticulture area. Gracing the grounds of Solage, an Auberge resort, Solbar was a Michelin-starred restaurant from 2008 to 2018. It’s still recommended in the 2019 guide, but that’s clearly not good enough for Solbar, and perhaps why Gustavo Rios, who left there in 2014 after seven years, was asked to return as executive chef in February. Rios has over 20 years of experience working at luxury properties, including Peninsula Beverly Hills. Prices are reasonable for Napa. The pan-roasted petrale sole is $38, same as the pleasing Périgord black truffle risotto. A starter of a perfectly balanced charred avocado and citrus salad is $18; desserts include maple-sugared donut holes with chocolate fondue, and a dark chocolate-glazed Baumkuchen; $15 each. Arrive early and enjoy an upscale, yet unpretentious lounge where the top-selling cocktail is the Sex in the Valley, made of Charbay green tea vodka, thyme, mint, cucumber, house-made lemonade and stares from uninitiated patrons when ordered.

Saving the best high-end hotel-restaurant combo for last, Las Alcobas in St. Helena was the Wine Country’s first luxury property built in eight years when opened in 2017. Six of its 68 rooms are within the restored Acacia House, a white Colonial Revival mansion that once St. Helena’s first resort hotel. The majority of Las Alcobas is built from the ground up. Decked in sleek steel, stone and wood, and clad in what must be at least 50 shades of gray, Las Alcobas is worthy of being named “trendiest hotel” in Napa and Sonoma by Fodor’s Travel. Beringer’s St. Helena Home Vineyard is the backyard of your guest room or suite, and even if cabernet sauvignon grapes aren’t in season, there’s still a picturesque view taken in from a romantic private terrace adorned with gas fire pit and soft seating. Inside, modern conveniences abound, including a top-of-the-line Toto Japanese toilet, electric black-out shades and French press complete with fresh ground gourmet coffee, premeasured, of course. The on-site signature restaurant within Acacia House has renowned San Francisco Chef Chris Cosentino (Cockscomb) at the helm. The distinguished presence of TV’s “Top Chef Masters” winner, along with an award-winning spa, complimentary chauffeured limos, adults-only policy and room rates that reach well above $2K a night contributes to this property being part of Marriott’s Luxury Collection.

The most recent study by marketing arm Visit Napa Valley found that wine tasting is the top activity among visitors. With over 500 wineries clustered like grapes in a valley just 30 miles long and five miles wide, that’s no surprise. Neither is what came in second: fine dining. Among Napa Valley’s 150-plus restaurants are more with Michelin stars per capita than any other wine region in the world.

Even with so much wining and dining, let alone the acres of farm and ranch land they require, Napa Valley still has room for shops, spas, art galleries, hiking trails, hot air balloons, golf courses and watersporty Lake Berryessa. Oh, and two campuses of the Culinary Institute of America, recognized as the world’s premier culinary college.

At historic CIA at Greystone in St. Helena and The CIA at Copia in downtown Napa, budding chefs, food executives, restaurant owners and master sommeliers invest years and tens of thousands of dollars earning degrees and certificates. In just a half-day and for a few C-notes, the rest of us will get a literal taste of what it’s like to be a CIA student by taking a hands-on cooking or baking class in the type of kitchen most of us have only seen on the Food Network.

The newest CIA Skills offering, “DIY Diet,” had this writer and 14 other amateur cooks donning aprons, but not the traditional headgear to match a pair of, what I’m coining, profcheffers. Our mission was to learn by doing under chefs Joy Siemion and Caroline Wetzelberger, both CIA products. Dishes ranged from the simple – mayonnaise, vinaigrette, and fruit sorbet – to the challenging – cauliflower grits with shrimp, kale and sweet potato power bowl with avocado dressing, and dark chocolate coconut bars that had some of us scratching our heads over how dietic this meal really is. Calories schmalories -- we feasted on our classroom assignment, washing lunch down with free-flowing, non-dietic CIA-label wine. A generous gourmet meal with vino, three hours of edible education from epicurean experts, and bragging rights about taking a class at the world-famous Culinary Institute of America, all for just $140. Who says Napa is expensive? 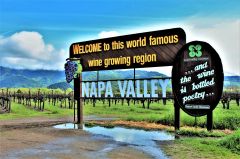 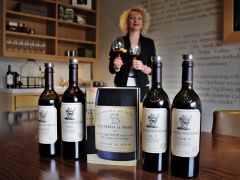 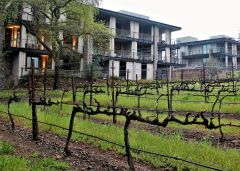 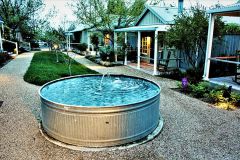 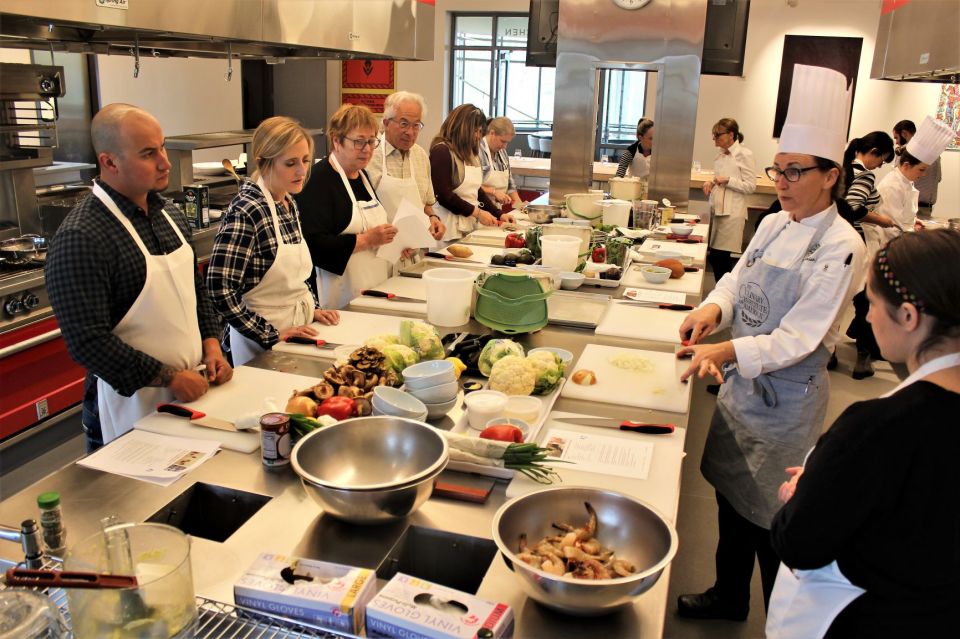