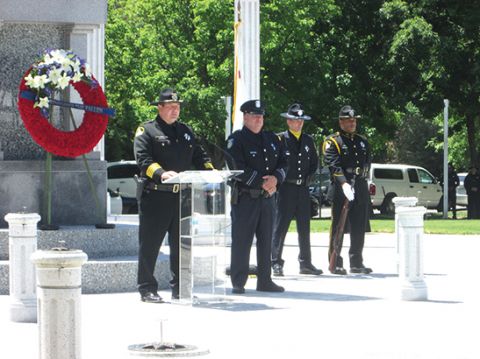 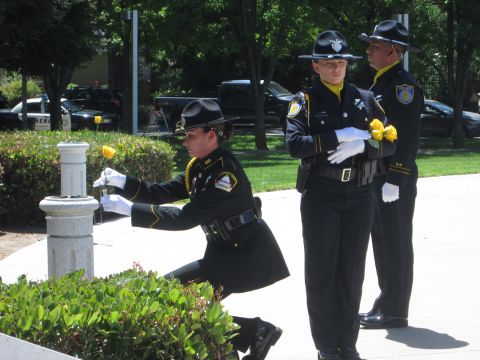 Placing of yellow roses on each memorial during the reading of the names – after placing, a moment to honor the fallen officer, then a salute.

WOODLAKE, SACRAMENTO, CA (MPG) - On Friday, May 2, officers from several agencies, including Sacramento Police Department and Sacramento Sheriff’s Department, descended upon the quiet Woodlake neighborhood for the 17th Annual Remembrance Ceremony, and to commemorate a new memorial plaque for Officer Mark Stasyuk who lost his life in the line of duty on September 17, 2018.

The ceremony included a procession of law enforcement officers from Sacramento Police Department and Sacramento Sheriff’s Department led by the Sacramento Firefighters Pipes and Drums.

“It is in times like these that we realize how fragile we are and how quickly our loved ones can be taken away from us.” Each officer, he added, to be remembered had paid the ultimate price, as did the fallen officer’s family, in order to protect the citizens.

“Today we are saddened, and also honored, to add yet one more hero to the rank.” He then called for prayers for Deputy Mark Stasyuk and his family.

“We honor Deputy Stasyuk for his extraordinary bravery in the face of imminent danger,” he stated.

Throughout the invocation, the bells of Sacramento Regional Transit’s light sounded gently. The memorial, a living monument, is situated across the street from Woodlake Park and behind the light rail station on Arden Way. Land was donated by North Sacramento Land Company, wrote Rotary Club of North Sacramento President, Stephen Lemmon. His organization, along with Woodlake Improvement Club worked with the land company.

“Since we had a great working relationship with the Sacramento Police Department, the idea was hatched for a memorial,” Lemmon wrote, adding that Rotary Club member Dennis Tsuboi submitted the design and the club contributed $10,000.

In 1992, “a foundation was formed including both unions for Sac PD and Sac Sheriff, reps for the Chief and the Sheriff, the Rotary Club, Woodlake and the Council Member,” wrote Lemmon.

A list of major funders, board of directors, and past board members is etched in granite beside the dedication stone that reads, “For all those who served & sacrificed wearing the badge, we are eternally grateful.”

“Welcome to these sacred grounds,” he said. “We will never forget the sacrifice that you have made for our entire community.”

“We pray that this will be the last year that we add a name to this very important memorial,” said Hahn.
Sheriff Scott R. Jones spoke next, thanking Supervisor Susan Peters, general public, and fellow officers.

“I love coming to this place. I come from time to time. It seems like things are a little quieter, things are a bit more contemplative. It seems like I’m able to be a little bit more reflective. I love the fact that the community takes care of this place. It is truly hollow ground,” he said, adding that he also hates that there needs to be a place like this and that another name needs to be added this year.

Chief Todd Sockman, Galt Police Department, spoke about the family of law enforcement and the family that includes the community.

“As a family, we can get through this,” he said.

Following the guest speakers, the name of each of the 39 fallen officers was called, with a moment of silence, and the placement of a yellow rose on each memorial plaque by members of each respective agency. Each officer was honored with a white-gloved salute by a member of his agency.

Sheriff Jones said of 4 ½ year veteran Mark Stasyuk, that he “exemplified what it meant to be a law enforcement officer.”

Yellow roses were presented to members of the Stasyuk family who carried the flowers and placed them on his memorial.

Following a moment of silence, the rider-less horse was led in and through the memorial, a bugler played “Taps,” followed by a 21-gun salute, and a flyover of helicopters in the missing flyer formation.

“If one member suffers, all suffer together,” said Sacramento Police Officer William J. Conner in the benediction. “We are all part of something greater than ourselves.” 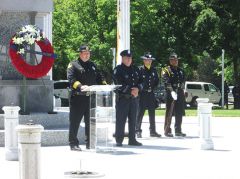 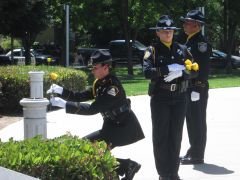 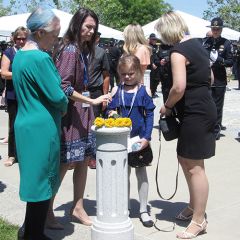 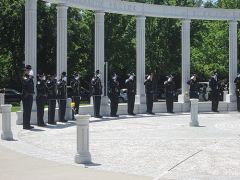 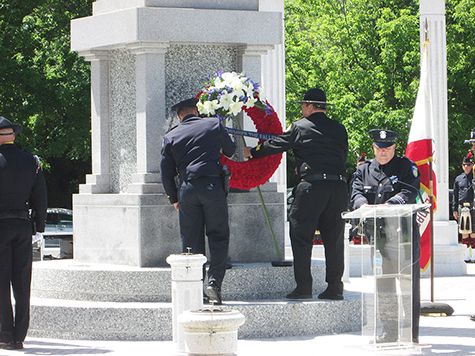